Like many others I have spent a fair amount of time following Joseph Esmilla's projects on his site:

One of the things that he covers in very useful detail is how to connect microphone transformers for use with moving-coil cartridges as a stepup device into a moving magnet phono stage. The beauty of this scheme is that most MC cartridges are 'current' devices that work well into low impedance sources - and that is inevitably what you get when you use a stepup transformer - the impedance is reflected back the source as a ratio, the relationship of the primary to the secondary. So with a stepup transformer you exchange high current, but low voltage (the cartridge at the primary) with higher voltage, but low current (to drive the input of a MM phono stage)...

Another advantage of using microphone transformers is that the primaries usually have more than one tap, so you can install a simple switch and get multiple ratios to try with your cartridges.

Finally, many of these microphone transformers were made very well - with mu-metal shielding and resonance control, plus high-grade core materials - recording and radio manufacturers well knew that part of their 'sound' and reputation relied on the quality of these parts. Mike LeFevre of Magnequest (who owns the Peerless design catalog) told me in conversations more than once that he could not make an Altec/Peerless 4722 for the cost we can buy them off of eBay.

Several years ago I sniped a couple of those Altec/Peerless 4722 octal transformers off of eBay and squirreled them away for use with the Bottlehead Seduction MM phono stage when I finally replaced the Grado on my turntable and got the 4722s into a case for use in 2005. 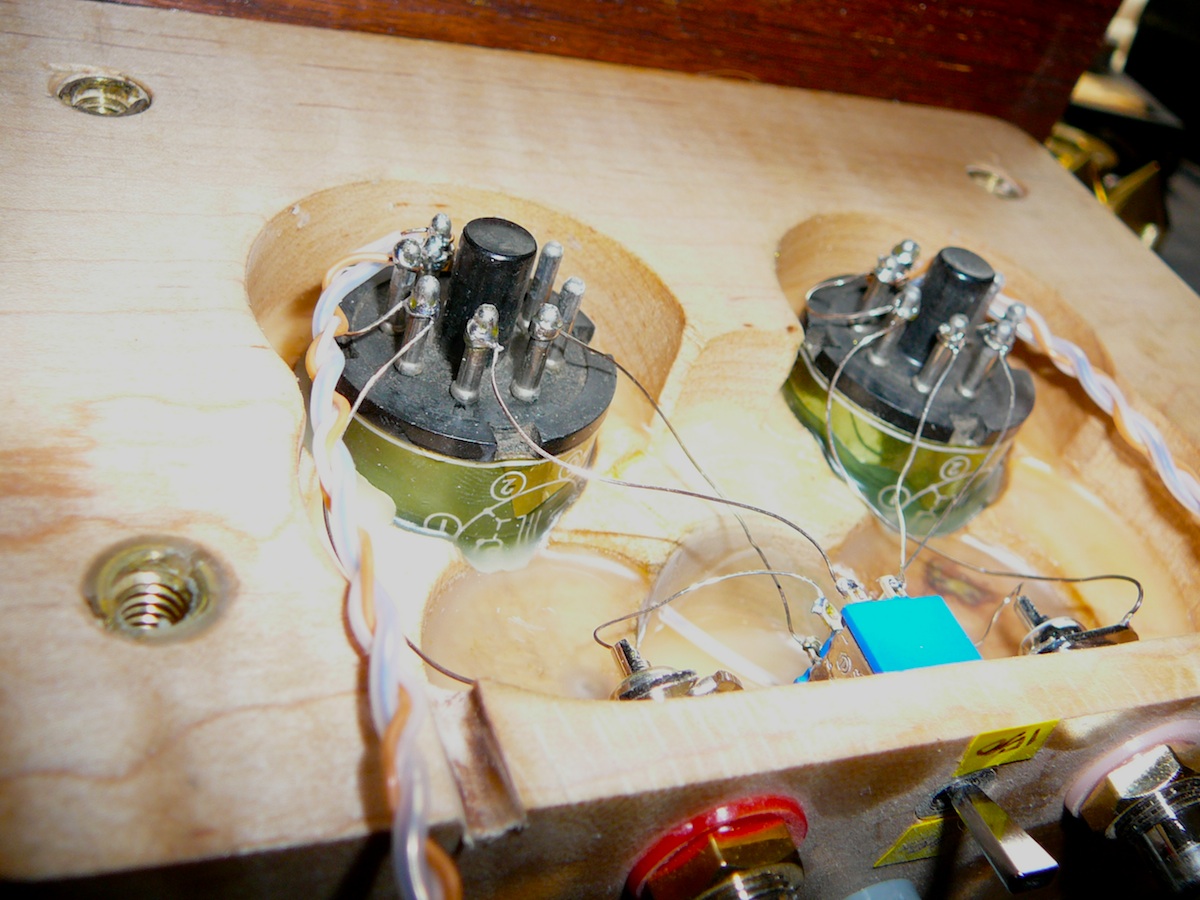 The case was made from laminated hard maple with a wenge base - I used threaded inserts to make a the cover removeable, and the transformers were potted into place with melted beeswax. Beeswax is easy to melt at a reasonable temperature so the transformers can be removed if needed, but it also has good dielectric properties. I used Joe Esmilla's 4722 wiring diagram with 27 ga solid silver wiring. Output cables were CAT5e with an extra 18 ga silver ground wire, and Australian 'Bullet plug' RCA connectors.

But the curse of the DIY is... now that I have something that sounds good, maybe I can do better... So I started lurking on eBay and bought some other transformers to try. Since there is not much information out there on the web on these vintage units, here are some of my findings:

I've seen a few people try to explain the math of this online, I guess I will take a shot as well - there are two different calculations used commonly.

1) Impedance ratio is (usually) the stated ratio for the transformer, use this to calculate the reflected impedance based on the input impedance of your phono stage (in this case, 47,000 ohms).

2) Voltage ratio (sometimes called turns ratio) is calculated using the square root of the impedance numbers, this tells you the approximate gain of the transformer

(but it is an approximation, impedance matching and voltage losses also play a part). I've included the intermediate values in the table above to give you a way to better see the math...

The new-old transformers are mounted in a variation of the laminated maple case made earlier. I went ahead and made four of them this time for future experiments... 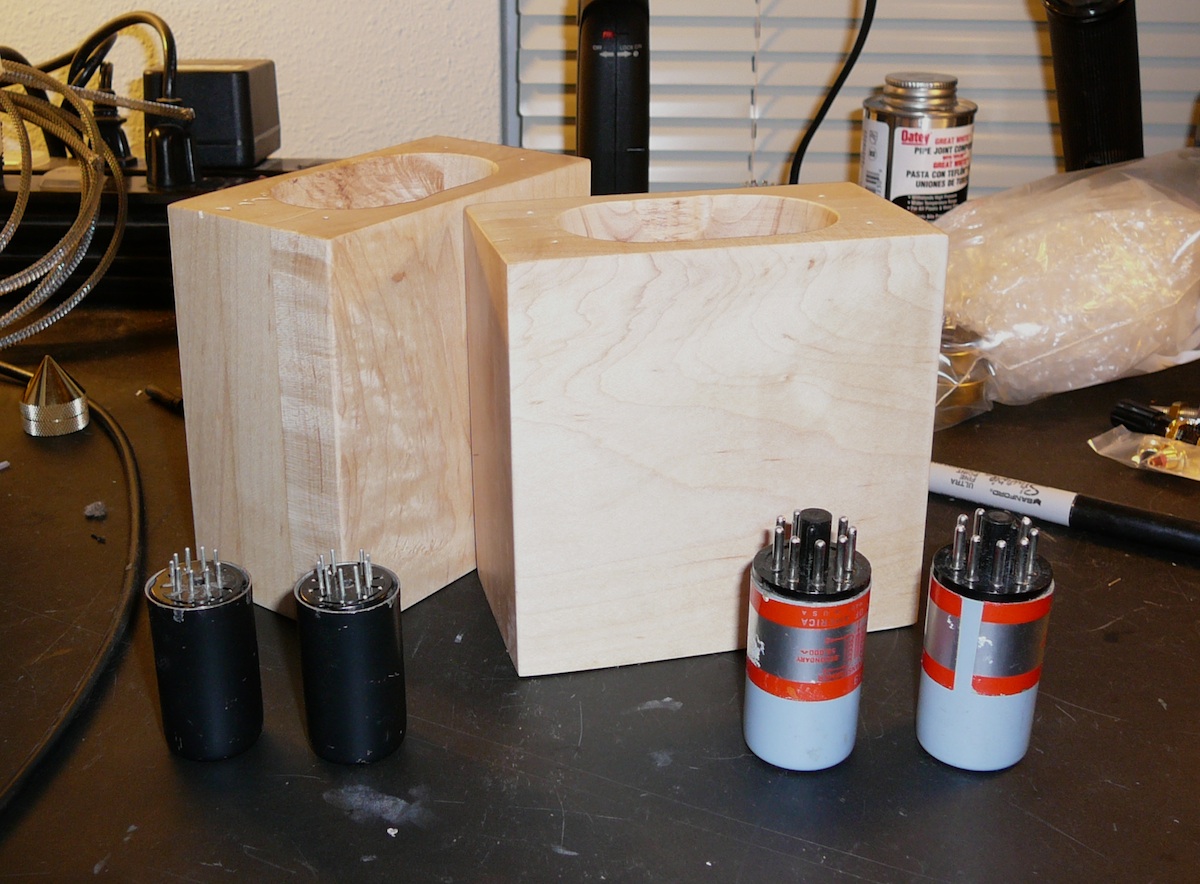 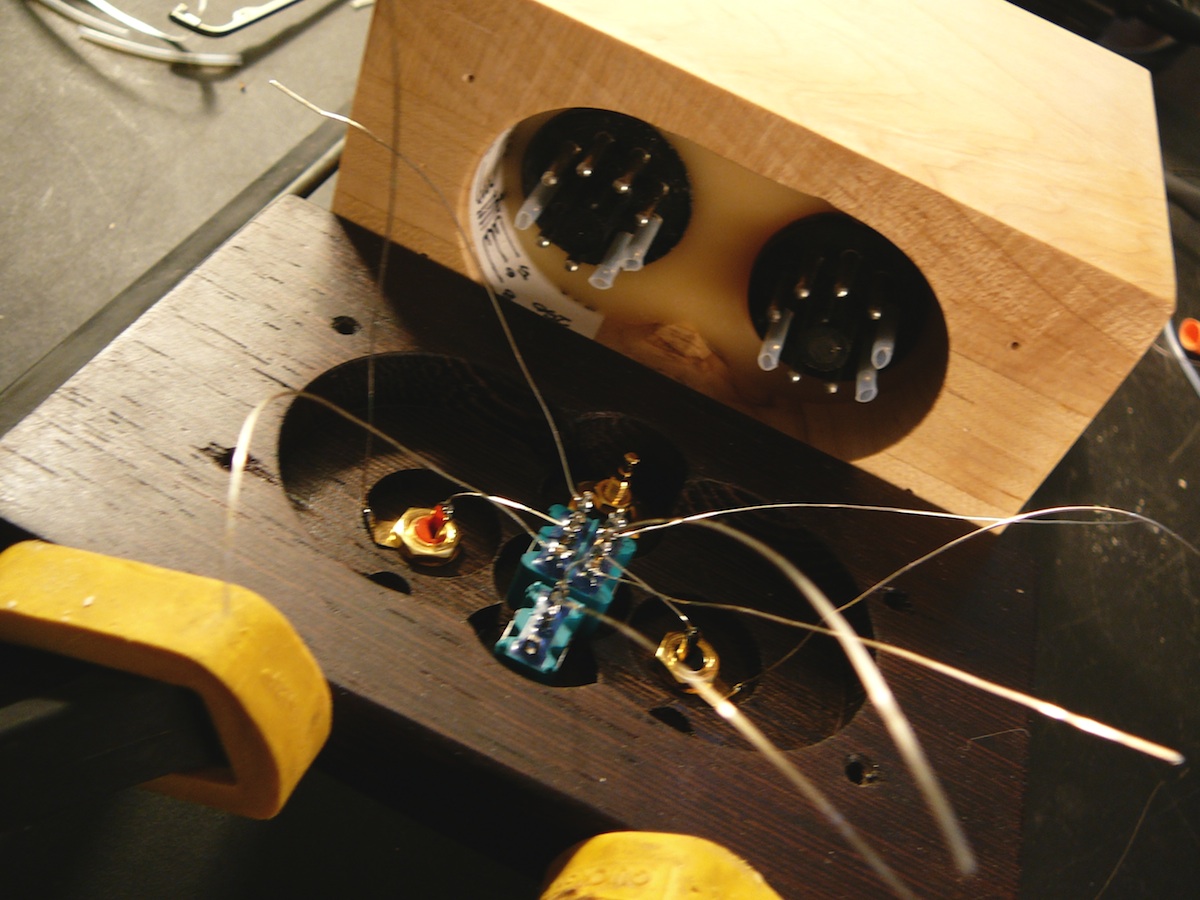 Using different wood ends to be able to differentiate the units from a distance, the RCA trannies will will have wenge ends, the Bogen units will be in all maple, and a future unit will have cocobolo or cherry ends. This series will also have a mono switch to bridge the outputs together. 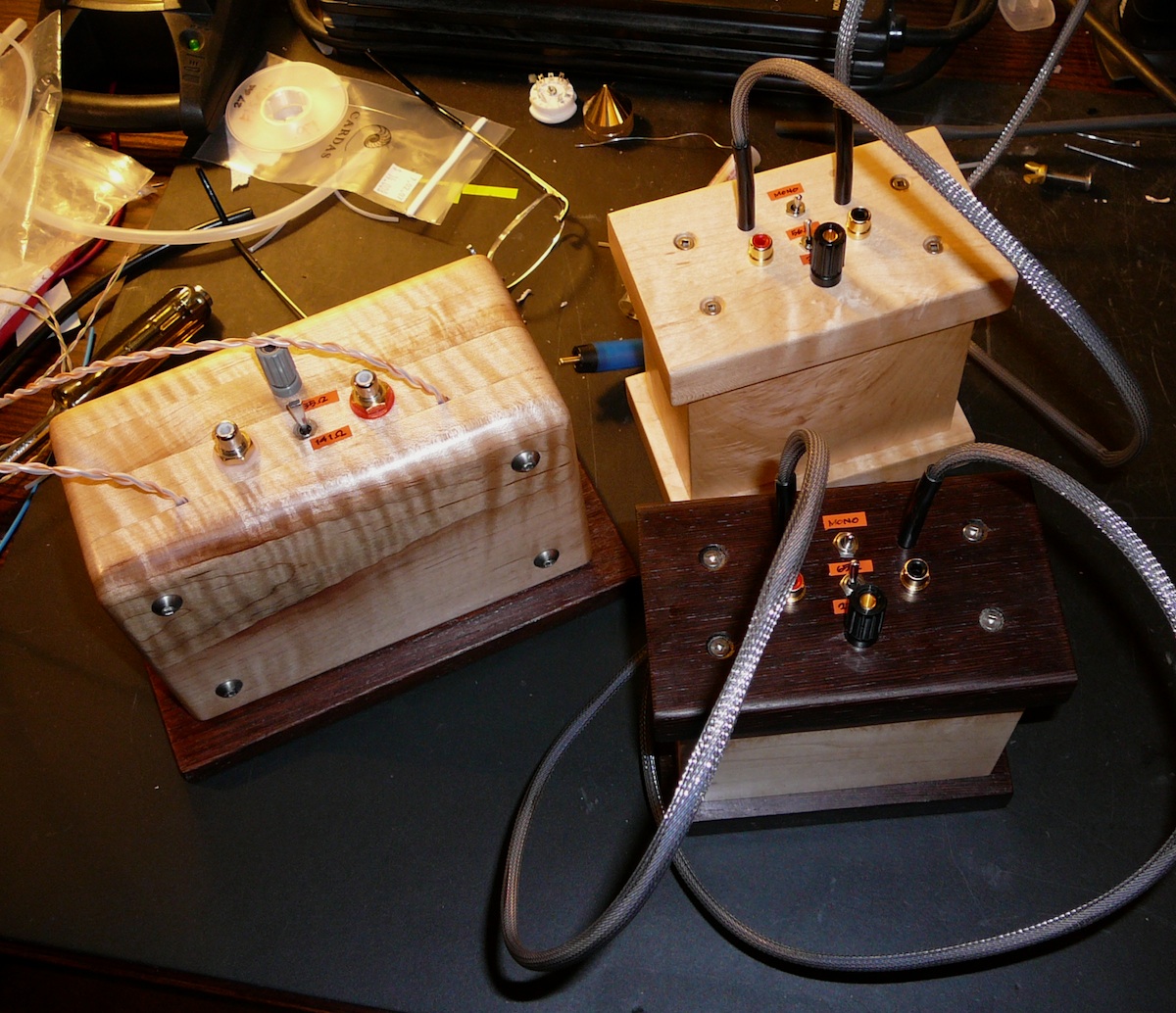 When I built all of the above we lived in a low EM area, and everything work fine with twisted pair leads and no shields other than the mu-metal pots on the transformers. Life was good.

But in 2007 we moved to Raleigh and bought a house with a great listening room that happened to be next to a high-voltage power line easement, with high EM (Electro-magnetic interferance) in the listening room. How high? I bought an EM meter and the ambient value is about the same as a 'quiet' measurement 4-5 inches from a power amplifier AC transformer. Yoiks. The result was 60 Hz hum when I tried to use an MC cartridge and stepup in the new room.

This sent me off on a 18 month excursion with MM cartridges -- fun, but not as satisfying as the MC world.

The key to my return to MC-stepup use is the Faraday cage. By enclosing the whole step-up block, and connections, and spare unshielded cable from the tonearm; and then adding braided shields to the fly leads and grounding everything to the phono stage, I was able to reduce the EM hum below audibility. I found this steel box at the Container Store, but there are others out there... 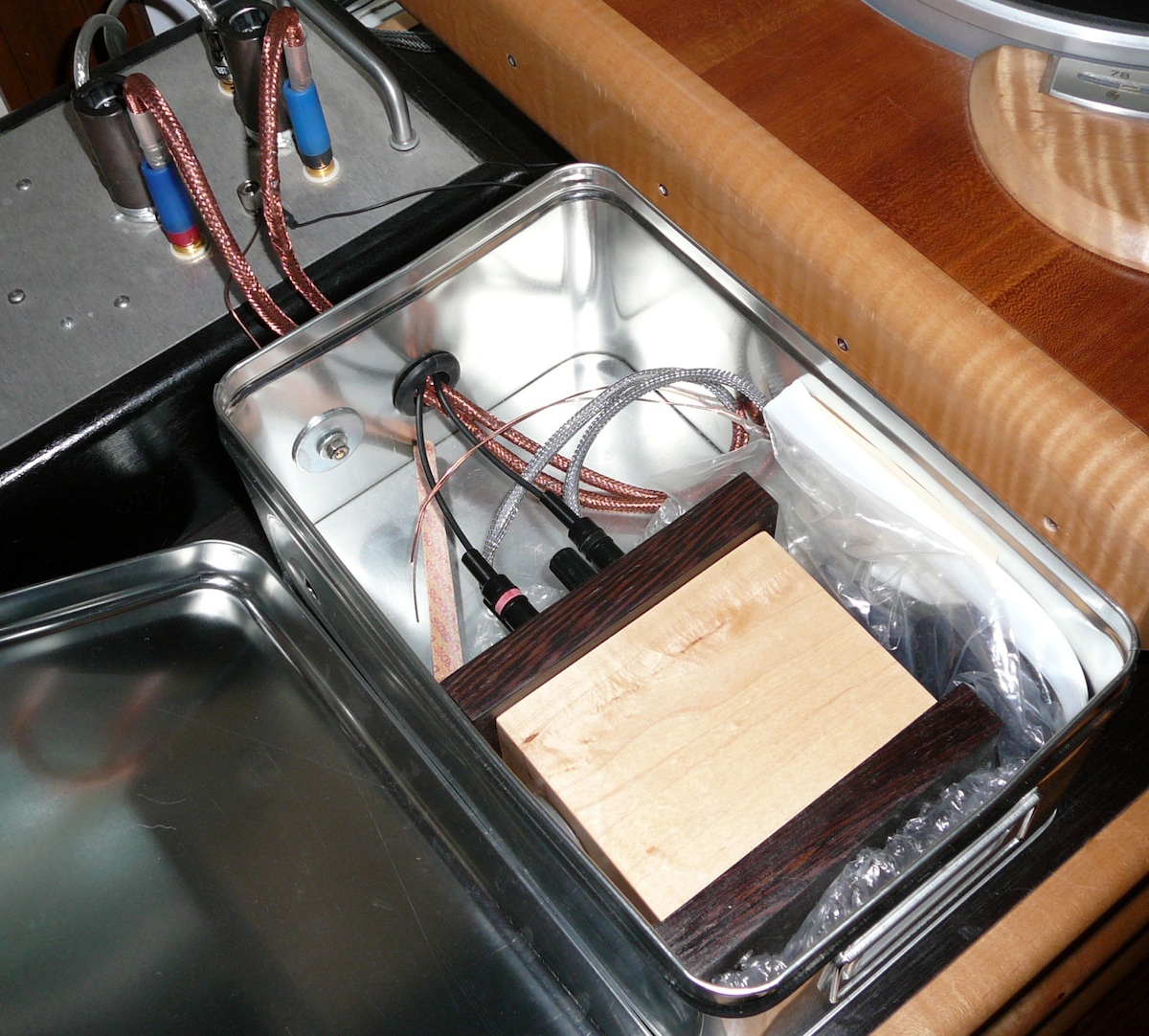 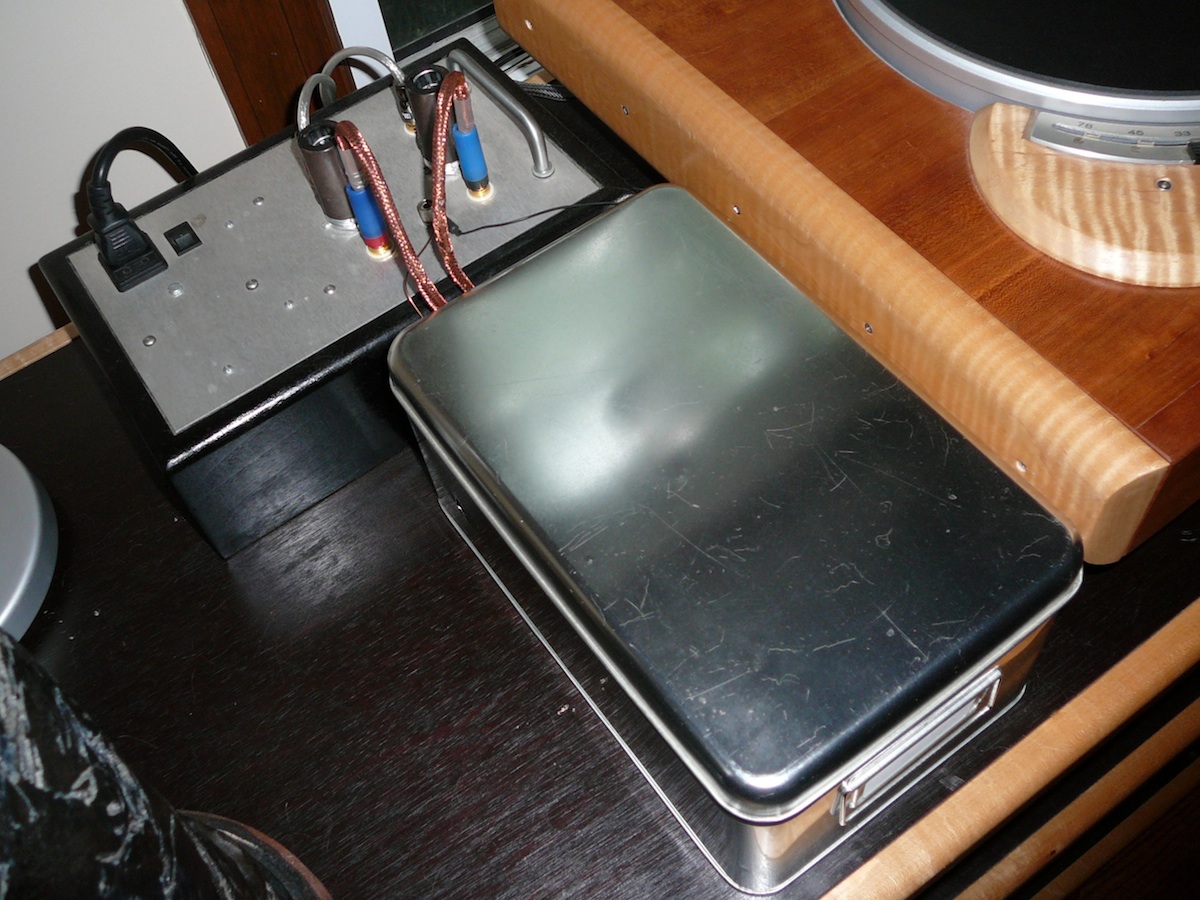 Good luck with your stepup projects!