I bought this Suzuki DR650s new in 1996 when I was living in Atlanta and rode it regularly until 2009... Late in 2019 I started a restoration project - there have been a lot of questions!

Sheesh, I don't know! I have more than 100 pages of log notes from the build, along with a lot of pictures along the way - but I'm not OCD enough to capture every step and there are gaps. I'll try to keep coming back and adding more. Good intentions.

Nope. Like a lot of my projects, it will never be done - you build something to live with it for a while. And in living with it you learn new things.

For example:
This thing is pretty loud with the Supertrapp IDS2 muffler... may try a DB killer if I can find a way to insert it at the inlet. Longer term... I almost pulled the trigger on a rewire with the motogadget controller. Expensive, but elegant. 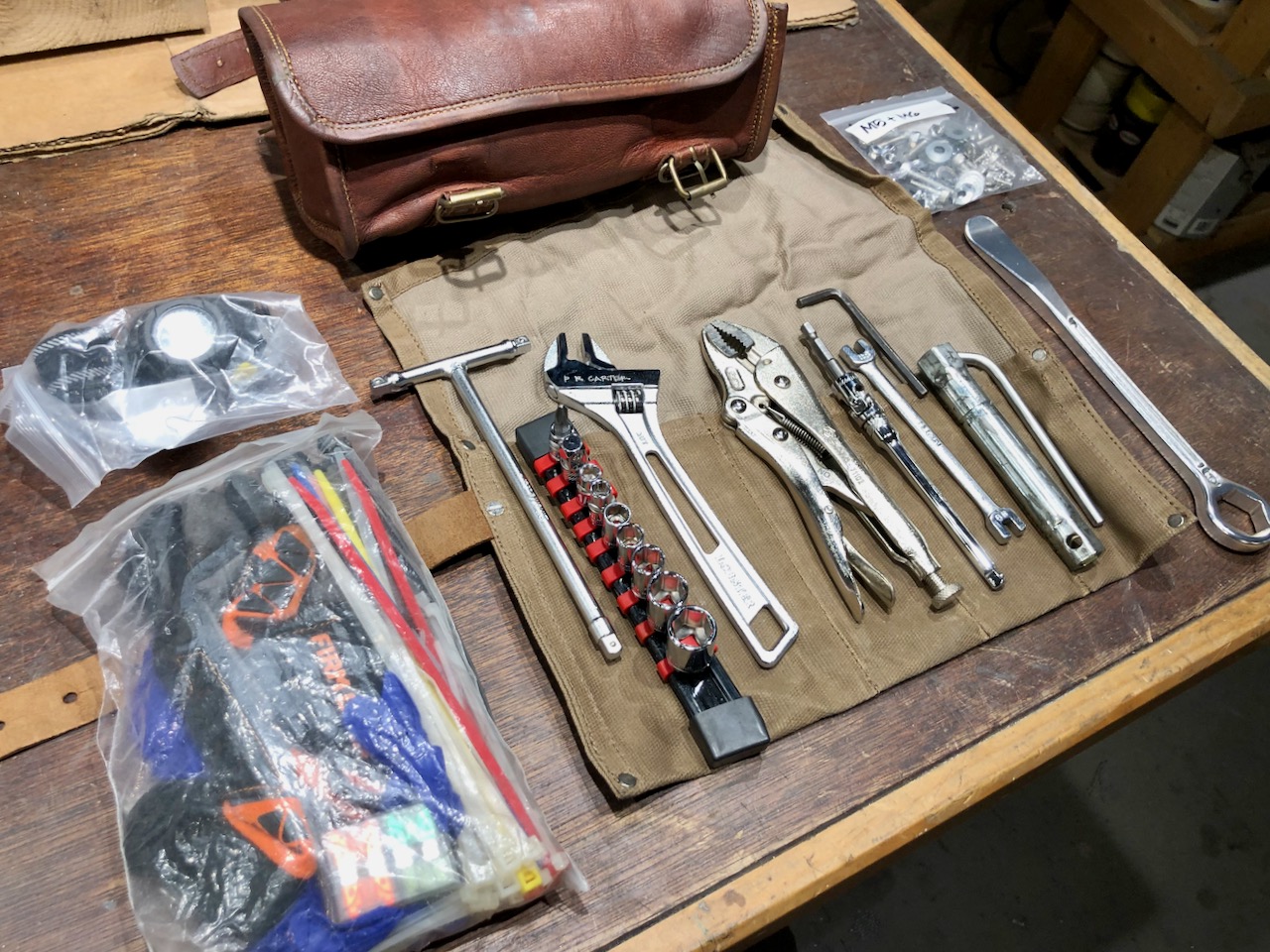 Bag is tight up under the headlight and held on with side straps around the upper fork stanchions. To keep the bag from sliding down and

...while we're talking about the fork, I did tap some M5 holes to hold stainless washers... this limits the fork swing to protect the steel tank, but they're hidden behind the tool bag:

Why did you replace the new front tire?

After a couple of hundred miles the handling of the bike still seemed... off. It was requiring a lot of deliberate effort to initiate a lean change, very different from the playful quick-turning DR I remembered. I've been tweaking the pressure but could not find much improvement, only different shades of the same. Then I found this thread ( Not2Shabby: Which new 19" front tire? - https://drriders.com/which-new-19-front-tire-t25881.html ) where Not2Shabby had the same Shinko 705 setup. The wisdom of the mob was that a radial front with bias-ply rear was not a good combo. I did think about the radial/bias mix when I ordered the Shinkos, but the size I needed for the front was only made in a radial. Strange, because 90% of the sizes are bias ply construction. I wonder if there must be an OEM need for a radial in that size?

The Shinko front tire was a handful to mount and dismount - a very stiff tire that makes it very hard to locate the tube without tearing up your hands. The Conti was a welcome improvement with a softer overall feel; I'd estimate that 80% of the tire change effort was removing the Shinko 705 (I'm expecting it will wear out sooner too).

Handling immediately improved - I can steer the moto with knee inputs now (at least, that's how I think of it kinesthetically). Slow-speed handling in parking lots and doing figure-eights is more predictable, and the new tire is much more responsive to forward/back movement and I can lean forward to flick the front into a quicker turn at road intersections. I still need to do some gravel riding to check that, but the university had the gravel parking lots locked down for an ACC football game on Saturday (Wait, what? Only family groups allowed in the stadium, but maybe they are trying to discourage tailgating parties).

Another benefit: I moved the Triumph-style front fender mounting from the triple clamp down to the fork brace last month, and a side effect with the large Shinko tread blocks was a mild air-raid siren effect at speed. The block gaps interacted with the fender and mount to make a wooooooooo sound that increased in pitch as speed climbed. The TKC70 stopped the sound.

Why keep the rear loop on the DR frame?

If you spend much time poking around builder websites, Pinterist, etc., there seems to be a 'code' for building hipster-scrambler-tracker motorcycles. But the code for these stylized projects is biased away from the practicality that inspired the trend. UK riders started racing cross-country "scrambler" races on street bikes because that was what was available; but these 1950s motorcycles were heavily modified to complete the muddy and steep courses. Stripped down frames and equipment, high fenders (or no fenders), high exhaust routing, and suspension tweaks from the competitive scrambler culture that spilled over into everyday life when riders used their racing bike as daily transportation. When recovering post-WWII-economy young adults widely adopted motorcycles, customization accelerated and branched into scrambler, cafe racer, and tracker styles.

Motorcycle customizers in the past decade were inspired by these historical mods, and applied them to restorations that became widely adopted through internet sharing of builder stories with striking photography. But many of these bike-photo-porn projects aren't practical motorcycles... they're art. It's not much of a scrambler if you start with a street bike and then remove suspension travel.

Photo shoots have become further styled, removing mirrors (unless they are bar-end or under the handlebars) and license plates/mounts.

I believe the true descendant of the scrambler is the dual-sport motorcycle. When my project went off the rails from simply making the bike run again, I wanted to keep the modern improvements of the DR650 (well, I guess 'modern' is arguable now that it's 24 years old), and mix in some aesthetics that would resonate with scramblers and the later enduro bikes of the 1970s. A motorcycle that's practical for commuting, errands, and travel across a range of weather and terrain, but also made me smile when I saw it.

We've reached the point where normal hipster-scrambler rules require cutting the back off the frame (and the rear fender) to get a highly coveted empty space beneath and behind the seat. Looks great in pictures, but useless in the rain or any sort of muck. I guess buyers will learn to love cleaning the back of the motor, suspension, and air filter after riding their new/old motorcycle in the real world. Else, they'll switch to displaying the motorcycle as art and not actually riding it.

The no-fender-no-seat-stays look also makes packing the bike for a trip into a mystery story.

Violating the hipster-scrambler building codes, I kept the rear loop on my DR frame.

Am I worried about scratching the frame?

Nope, this will never be a concours entry motorcycle, it's intended to be ridden. And riding means occasionally dinging things up.

How can you take that on a trip without bags or hard cases?

Other things to make the bike trip-worthy... Side panel inserts for removable loop tie-down points

Plus... Loops under the seat for side bags straps and sheepskin seat cover (hidden in shadow but open to sides)

Did I buy some items that, in hindsight, I regret?

Well yes, you betcha, but we all suck at predicting the future. And I may still use some of those things. But that's such a tiny weight against the balance of what ProCycle provided, from the impressive collection of information to custom parts with testing and support.

What are some thing you learned?

Why would you sell it?

I had a significant injury to my left leg in the summer of 2018 when I was riding my bicycle home from work - I broke my fibula into four pieces going down at 20MPH. It was gravel, and several bad things happened at the same time, but I didn't realize it would affect my motorcycle riding until I had the DR650 back in riding condition. I've ridden hundreds of miles on the restored motorcycle and I can't get past the nagging worry about going down at higher speed.

I completely enjoyed the restoration process. I put everything I know into making it a reliable and competent motorcycle, and it gets attention from riders whenever it's parked in public. But it deserves to be ridden and I'm realizing I just can't go back to riding it daily. Or weekly. Someone else should enjoy this motorcycle, I need to find the right person.